If you are on holiday in the Riviera del Sol (Mijas Costa) and you fancy taking a break from the beautiful beaches, refreshing sea and the buzzing nightlife, you will find that there is still so much more to discover in this area. This corner of Andalusia boasts a deep and fascinating history plus breathtaking landscapes that deserve to be explored, even just a little.

We have carefully selected 9 of the most interesting attractions in the Costa del Sol area, all within a reasonable travelling distance and thus, perfect for a day trip.

Mijas Pueblo is a very popular tourist resort on the Costa del Sol and is just a few kilometres from the beach. Perched on a steep hill with a spectacular view of the coastline, is the very centre of the old town – Mijas Pueblo – one of the most well-cared-for white villages in the area.
Don´t miss a visit to the arab walls and gardens, which offer some of the most beautiful views of the Costa del Sol and it you have the time, take a trip to the beautiful little Virgen de la Peña Chapel. The mountainous surroundings of the resort also offer several options for outdoor enthusiasts, but there are also plenty of options for rest, taste and relaxation for those who prefer a holiday of that nature.

With over 3000 years of history, Málaga is one of the world’s most famous cultural destinations. Home to artists such as Picasso, Málaga has taken full advantage of its potential to provide unforgettable experiences for all the senses.
Visitors can come to visit and admire the monuments left to us by Phoenicians, Romans and Arabs. They enjoy the beauty of the art exhibited in the many museums that open their doors every day of the year. They savour the exquisite and varied cuisine in our bars and restaurants that offer the best products from our land and from around the world while taking advantage of making purchases in our shopping streets. Our visitors feel the breeze and the sun and they savour the scent of the sea and the jasmine that perfume our city.

Culture, cuisine, parks, natural areas, beaches, shopping, fiestas and so much more. Málaga is simply wonderful in every way. Enjoy your stay! 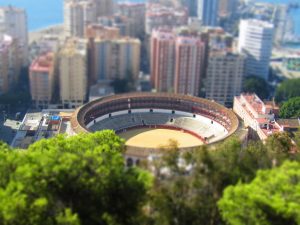 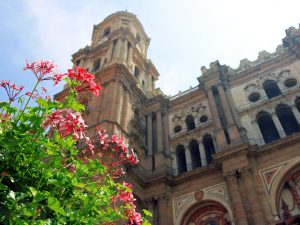 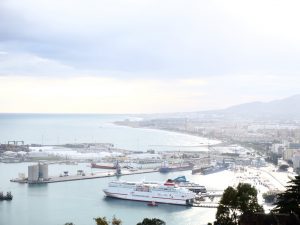 History, nature, gastronomy and art. The beautiful Ronda boasts a rich historical and artistic heritage, symbolic Roman and Moorish monuments, a lush natural environment, some of the most sought after and appreciated Spanish wines and a breathtakingly dramatic location all contribute to make it one of the most visited and photographed cities of Andalusia.

Located less than an hour’s drive from Marbella, this picturesque town is sat on a rocky peak almost 800m high, overlooking an amazing valley and offering spectacular views of the Serrania de Ronda, a rural region dotted with pueblos blancos and interesting natural places. 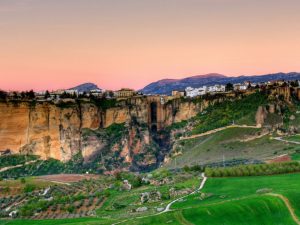 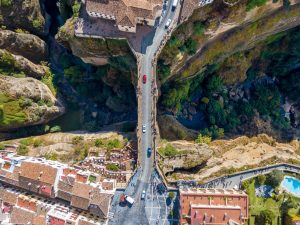 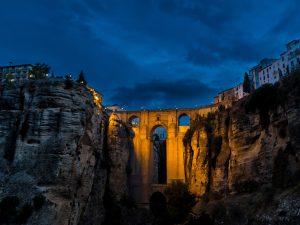 Known until recently as „the most dangerous path in the world“, the Caminito del Rey was recently renovated to be safer and more secure. In just a few months it has become one of the most visited attractions in the province of Malaga.

Known until recently as „the most dangerous path in the world“, the Caminito del Rey was recently renovated to be safer and more secure. In just a few months it has become one of the most visited attractions in the province of Malaga. 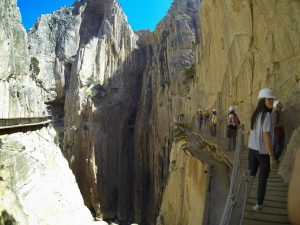 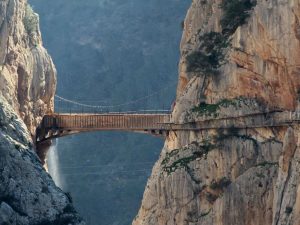 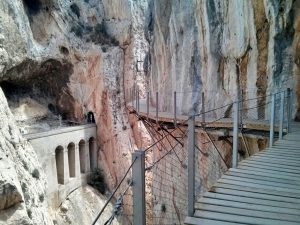 The Nerja Caves are some of the most impressive natural attractions in Spain. Discovered by chance in 1959 by a group of boys, the caves have revealed numerous wonders to scientists over the years.

From the longest limestone column in the world, to cave paintings made by the Neanderthals who lived more than 42,000 years ago, the Nerja cave system conceals countless, impressive and wonderful archaeological and geological treasures. A visit not to be missed. 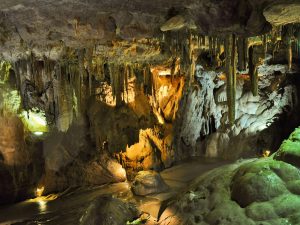 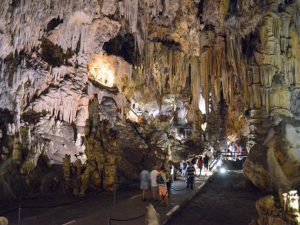 The Antequera Dolmens Archaeological Site is an ensemble of megalithic monuments comprising the Menga and Viera dolmens and the tholos of El Romeral. It constitutes one of the greatest megalith examples in Europe. These were the first forms of monumental architecture in Prehistory. According to the available information these constructions date back to Neolithic times, and are more than 6,500 years old. The complete Megalithic ensemble has recently been declared a World Heritage Site by UNESCO.

The combination of the spectacular landscape of the Antequera Dolmens with El Torcal and the Peña de los Enamorados is known as the Site of the Dolmens. An unmissable visit for anyone who wants to discover Prehistoric culture and enjoy a unique natural setting.

Few places can boast of having a historical and cultural heritage as rich as that of Antequera. Deep in the heat of Andalusia, this city is host to over fifty monuments and archaeological sites of extraordinary importance.

To walk around Antequera is to go back in time. A glorious history that has left its mark in stately homes, churches and convents of the most varied styles, a Muslim fortress and a prehistoric ensemble that has been declared a World Heritage Site. The municipality also has one of the most astounding natural parks in the province of Malaga and in the whole of Spain, El Torcal.

A legacy of the Muslim period is the Alcazaba. Although originally erected in the 11th century as part of the city walls, the Papabellotas Tower and the Torre Blanca (White Tower) were built at a later date. A walk along the barbicans‘ passageway takes us close to the Arco de los Gigantes (Giants‘ Arch) built in 1585. Just behind this is the vantage point of Mirador de las Almenillas. 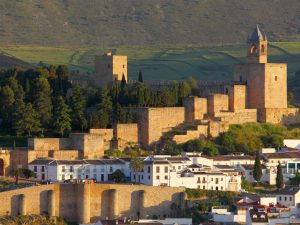 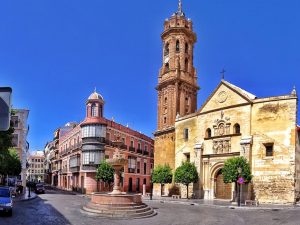 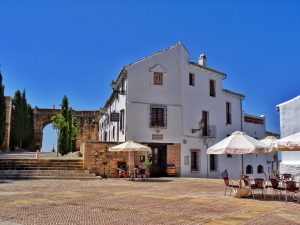 Due to its unusual limestone rock formations, Torcal de Antequera boasts an impressive landscape that is considered to be unique in the world.

Its 1,171 hectares have often been used in science fiction films. It is easy to get lost while walking in its labyrinth of rocks, depressions and valleys, passages, landings and narrow passes. The limestone nature of the terrain makes it especially susceptible to erosion by climatological agents such as rain and wind. In 1929, it was declared a Place of National Interest.

Also present are a number of endemic species: elms, wild blackberries and wild grapevines (on the edges of the stream).
A wide variety of animal life, notably the rabbit, fox, wild cat and weasel as well as some Spanish goats. Vultures, falcons, eagles, sparrow hawks… 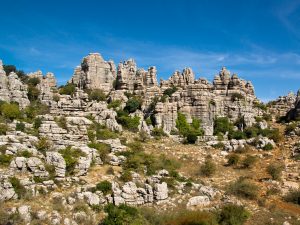 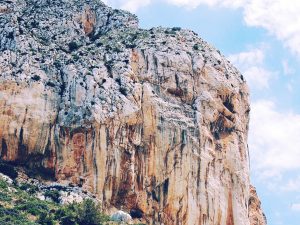 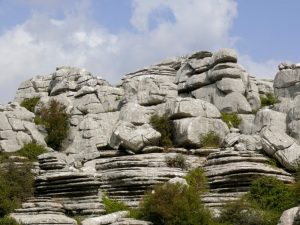 The British colony of Gibraltar abuts into the sea at la Linea, and is a strange but alluring fusion of British life from days gone by, with added Spanish weather, and a few other bits thrown in to the mix that are unique to the Gibraltarians.

The official language on the rock is English, although Spanish is spoken widely, as is the local patois known as Llanito, which is a strange mix of Spanish, Genoese, Maltese, English, and various other bits which have been added into the lingo over time.

Getting in to the rock.
As the rock is technically not part of the EU or Spain, strict border controls are in place throughout the year and although in previous years, a warming in relations between it’s neighbours meant less queues at the border, unfortunately the present Spanish government have, to date, not been very helpful with this thorny issue of access to and from Gibraltar and therefore you should expect delays if you are a motorist, or at least 3 hours to enter and to leave!

If you are staying nearby, a day trip is often best rather than staying in Gibraltar which is expensive to say the least, although remember businesses on the rock will accept euros, the currency here is pounds sterling. We stayed at the wonderful Rock Hotel for a few days instead of putting up with the awful border queues

Most travel guides that you will have read previously, will mention tax-free shopping in main street and in the Morrisons supermarket (which is a strange experience if you are used to Spanish supermarkets!), taking the cable car to see the monkeys, seeing the siege tunnels, hanging around Casemates square or the landport tunnel, seeing the Trafalgar cemetery or relaxing in the tropical gardens of Alameda, but on our visit we decided to do it differently, so this is what we came up with! 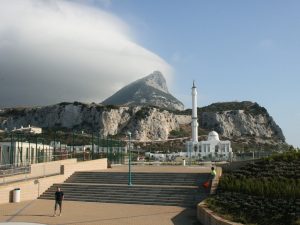 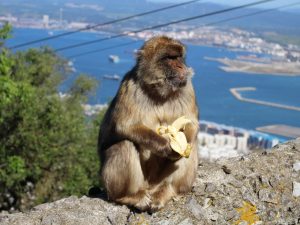 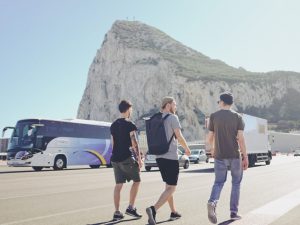